I found this to be an interesting article about the PSA test and all the controversy that comes with it and its use.

As someone who has lived with PSA tests in their life for eleven years, I can relate to much of what she’s said in her article. Just read through this blog and you’ll see that PSA anxiety is a very real thing.

But in those eleven years, I’ve also learned that the PSA test is merely a tool used to give you a data point. It’s just one of many data points that should be used in your decision-making process, either before initial treatment or after. Like any tool, you must be trained on how to use it properly.

There is no such thing as a “good” cancer. However, I do believe that prostate cancer is far more nuanced than many other cancers. When you hear those three words, “You have cancer,” the near universal response is, “Get it outta me! Now!” But with prostate cancer, that many not be the appropriate response in some cases. That’s where patient education at diagnosis has to become much better. It’s a huge paradigm shift for a cancer patient—and even some medical professionals—to realize that doing nothing (aside from routine monitoring) can be an option in certain cases.

That’s something that I’ve learned over the years.

I’ve been blessed to have a type of prostate cancer that has been so slow growing that it’s allowed me to be around for eleven years after diagnosis. Would I do anything differently? I may have postponed my surgery a little longer to watch what my PSA was doing over a longer period to establish a trend. However, given that the doctors felt a tumor during the digital rectal exams, that told me that I was dealing with something more than a few random cancer cells. There was a mass, and it needed to come out.

Obviously, I’ve made the choice to monitor as my PSA has slowly increased over the last six years since becoming detectable again, even though some were quick to recommend salvage radiation therapy. With luck the PSMA PET scan on 30 November will reveal whether that was the dumbest decision of my life or whether I may be able to continue on my current plan of doing nothing but monitoring or whether it’s time for salvage radiation.

Lastly, a few other things that I’ve learned in the last eleven years is that every patient’s case is unique and that even the medical professionals can’t always agree on the best course of action. You just have to do your own research and go with the best information you have available to you at the time. It’s your body, your life, your choice.

3 thoughts on “The Paradox of a Man’s Most-Feared Test, the PSA | The MIT Press Reader” 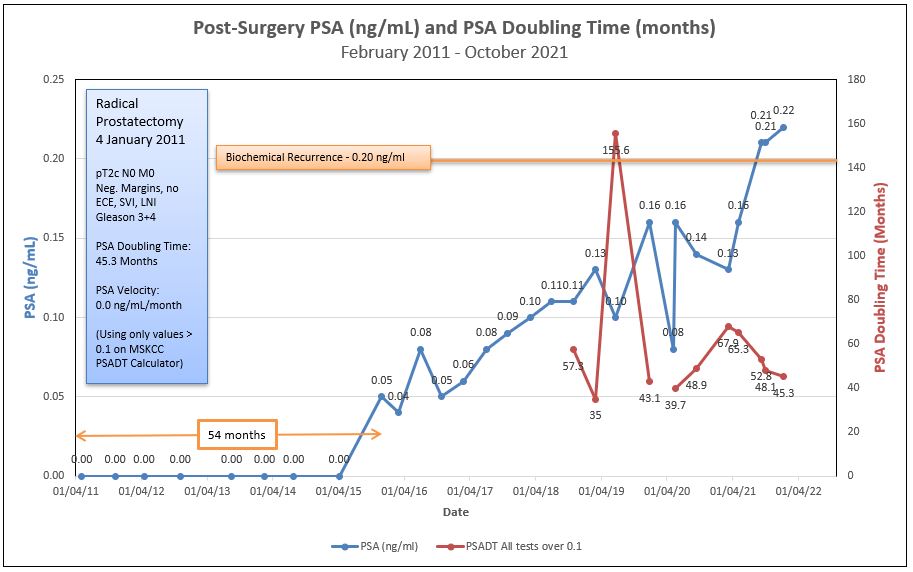