So it’s hard to believe that it was a year ago last week that this adventure began with my doctor feeling a mass on my prostate during my routine physical on 7 October 2010.  My how time flies when you’re having fun!

*     *     *
So two days after last month’s posting, I came down with a nasty head cold that knocked me out of commission for a week or so.  On that Tuesday afternoon, I was toast and went home from work early; I stayed home Wednesday and Thursday.  Friday, I dragged my butt back into the office, but that probably wasn’t the wisest move, because Saturday and Sunday I was in bed the whole weekend.

Once the cold was over it seems that my seasonal allergies have managed to kick in, causing runny noses and sneezing.

BIOLOGY AHEAD
Those experience proved to be a step back as far as the ol’ plumbing was concerned.  With nearly every sneeze, cough, and pressure used to blow my nose, there was some leakage on the other end.  It was frustrating to have to go back to wearing pads for about 10 days; I was hoping that that chapter of this story was behind me.﻿  Apparently not.
I’ll have to admit that the experience was a bit depressing and made me want to have my prostate back.
Do I regret having had the surgery instead of some other treatment option?  No, not really.  There can be risks and side effects with each.
With the surgery, I’m cancer-free as of my last check-up.  Those nasty little cells were removed from my body completely.  With the seed radiation therapy, you’d know that the cancer cells are still there, and hope that the radiation is killing them faster than they’re growing.  Having that little cloud constantly hanging over my head would be worse than occasionally leaking pee into my shorts.
While the direct beam radiation methods have gotten much better, the idea of possibly losing control of your bowels as a result of the treatment is, again, worse than a little leak now and then.
So when I do get a bit down or frustrated by the leaks, I remember two words: Cancer-free.
Going forward, I’ll just have to take more vitamins, wash my hands every ten minutes, avoid contact with any people, and stay away from pollen…  🙂  Okay.  Perhaps a bit extreme.  I’ll take care and keep a stock of pads on hand instead.  And keep doing my pelvic floor exercises.
*     *     *

Of course, after going through all of that, I really didn’t need to get confused by this recent story about the effectiveness of using the PSA test for prostate cancer screening:

Just in case the link doesn’t work (not sure how long CNN keeps it up), here’s the text from the article:

(CNN) — The U.S. Preventive Services Task Force, the group that told women in their 40s that they don’t need mammograms, will soon recommend that men not get screened for prostate cancer, according to a source privy to the task force deliberations.

The task force is set to recommend a “D” rating for prostate specific antigen, or PSA, testing. Such a rating means “there is moderate or high certainty that the service has no net benefit or that the harms outweigh the benefits,” according to the group’s website. The task force is set to propose this recommendation Tuesday, and then allow for a comment period before issuing a final recommendation.

According to a draft copy of a report released Friday, a review of studies shows screening with the PSA blood test results in “small or no reduction” in prostate cancer deaths.

The report adds that PSA testing is “associated with harms related to subsequent evaluation and treatments.”

The PSA test, which is sometimes accompanied by a digital rectal exam, can help determine if a man has prostate cancer. The problem is that many of the cancers that get detected are so small and slow-growing, they’ll never be harmful, and doctors have a difficult time discerning the quick, harmful cancers from the slow, harmless ones.

If you test 100 men over age 50, 17 of them will have prostate cancer, and only three of those will have a fast-growing cancer and die of the disease, according to Dr. Kenneth Lin, senior author of the paper.

If the 14 men with the slow-growing cancers are treated, they could be rendered impotent or incontinent from the treatment; or worse, the treatment could kill them. About one in 500 men who has a radical prostatectomy will die because of complications of the surgery, according to Lin.
Some prostate cancer patients were disappointed with the task force’s decision.

A spokesman for the Prostate Cancer Foundation called the proposed recommendation “a tremendous mistake.”

“You’re talking to someone whose life was saved by [the PSA test],” Dan Zenka said.
But Lin says he believes testing does more harm than good.

“Maybe you should get tested if you have this horrible family history where everyone gets prostate cancer before the age of 50. But for most men, testing is harmful,” he said.

Until last year, Lin worked with the Preventive Services Task Force as a medical officer for the Agency for Healthcare Research and Quality. He says the task force voted in 2009 to give PSA screening a “D” rating, but it didn’t announce it because of the uproar over the mammogram recommendation.

“I was so frustrated with the political interference, and this was the final straw,” said Lin, who left the group in November and is now an assistant professor of family medicine at Georgetown University Medical Center.
if(typeof CNN.expElements===’object’){CNN.expElements.init();}

CNN’s Jennifer Bixler and Aaron Cooper contributed to this report.

I’m not sure how to take that report, especially on top of my experiences over the last month.

I disagree that the test itself is harmful.  It’s a simple blood test.  It’s the results of the test that can cause issues.

Knowing that you have an elevated PSA reading will likely cause some emotional strain, but is it better to bury your head in the sand and not know that cancer may be alive and well within your body?  Sometimes ignorance is bliss, but I don’t think most men would think so in this case.

It’s what you do with the PSA results that can cause the harm.  Perhaps if you had an elevated PSA without any mass felt during a DRE, you may want to wait and monitor your PSA over a period of time.

In my case, my doctors felt a sizeable mass on my prostate despite a relatively low PSA reading (5.0).  My prostate weighed 70 grams on removal; a normal prostate weighs 40-45 grams.  I was told the cancer was a slow-growing type (Gleason 3+3 = 6) but how much longer could I have gone without having the cancer escape my prostate and spread to my lymph system, bones, or organs given the size of the tumor?  Who knows.

If I apply the definition used in the article, I guess I have been “harmed.” I have minor stress incontinence and my sexual function has yet to return. But for me, I can live with being “harmed” in return for being cancer-free (“live” being the operable word).

The only thing that I can say is that each case is unique, and each man’s tolerance for risk is different.  In my case, I can say with confidence that I made the correct choice for me and my circumstances.  Is my choice the right choice for someone else?  That’s not for me to say.

The one thing that is good about that article is the fact that it really makes you think about ALL of the options that are out there.  Still, that can be very confusing, so take the time that you need to evaluate what will work best for you.  But if you can analyze something until the 12th of Never, you also need to recognize that, at some point, you need to make a choice.  If you’ve done your homework, it will be the right choice for you.

Last month was National Prostate Cancer Awareness Month, and I searched the archives of the Indianapolis Star to see how they covered it:

There were only three articles that referenced prostate cancer; one was an obituary and another was a two-line announcement of screenings being offered at a local hospital.
Here’s a snapshot of today’s Indy Star during Breast Cancer Awareness Month: 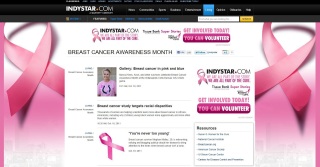 A slight difference?
Don’t get me wrong.  No one should have to introduce the word “cancer” into their daily vocabulary, male or female, and I’m not trying to discount all the wonderful efforts that have been made over the years to find a cure for breast cancer.  But seeing as prostate cancer will affect more men than breast cancer will affect women, I’d like to see at least a little more attention, awareness, and research paid to a cure for prostate cancer so that someday it’s on a par with that given to breast cancer.
Call me childish.  Call me bitter.  Or just understand that I’m trying to do my part to advance the cause.﻿
﻿