So I’ve been itching for the last 24 hours.

First, there’s all the incision points.  They’re healing nicely but a couple of them have a nice scab over them that I just want to scratch right off.  They’re driving me nuts.  Of course, I won’t.  I’ll just leave them heal on their own.  It will be faster that way.

Second, there’s the body hair that’s regrowing where they shaved me prior to the surgery.  That stubble–in places where stubble should never be–also itches like crazy.  (By the way…  Just how do you get that job of body hair shaver?  Are you the lowest resident or nurse on the totem pole?  Did you draw a short straw or lose a bet? I don’t know.)

Finally, I’ve been itching to get out of the house, so I did.  I busted loose.  Escaped.

After paying a couple of bills yesterday, I realized that I was down to a couple of postage stamps left, so I hopped (well, not so much hopped–gently eased myself) into my truck and drove the 8 blocks or so to the post office.

With the forecast of snow, I also headed to Kroger to pick up a few things–loaf of bread, fresh fruit, freezer containers, juice.  Nothing much.

The trip lasted about 45 minutes, and that was just about the most I could handle.  I wasn’t my usual speed demon through the aisles of the store; I took it at a much slower pace.  I was very careful getting in and out of the truck and carrying the bags into the house.  All in all, it was a successful trip.  Except for one thing.

When I returned home and put the groceries on the kitchen counter, I noticed that I forgot to bring my Cialis prescription to the pharmancy.  I’ve got enough pills to get me to Friday night (take one per day).  Because of the snow, I went back to the pharmacy this afternoon to refill it.

The surgeon’s office forewarned me that it’s not likely that my insurance would pay for it, and they were mostly right.  Interestingly, my insurance will pay for 6 of the 30 pills.  Odd.  I’ll have to do a cost-benefit analysis to see if having the ability to “sport wood” is worth $140 a month.  I know it’s important to take it regularly to reestablish that functionality, and once it’s reestablished, I may be able to cut back on the chemical assist.

There were a few snowflakes landing on my windshield as I left the pharmacy.

As far as the incontinence goes, it’s about the same.  It really only seems to happen when I stand (although when I took a couple of steps in a parking lot, I felt a tiny squirt), but not every time that I stand.

One thing that concerns me a little.  Early on, when I would stand, I would contract my floor muscles and that seemed to be doing the trick.  Now, that seems to be less effective.

I only got up twice last night to use the bathroom (I’m cutting back my fluid intake shortly after dinner).  The second time was a close call.  I hung on almost too long.  Interestingly, as one of my fellow prostate cancer survivors told me, I was astonished at how quickly I can drain a full bladder now.  It took somewhere between 5 and 10 seconds and that was it.  Done.

Finally, back to the itching theme…  I was told when I got the catheter out to expect an itching or burning sensation in my urethra, and I do, especially after urinating.  But there are other times it occurs, too, and that itching tells my brain it’s time to drain my bladder even when it really doesn’t need to be.  It’s frustrating trying to combat that sensation while trying to retrain my muscles. 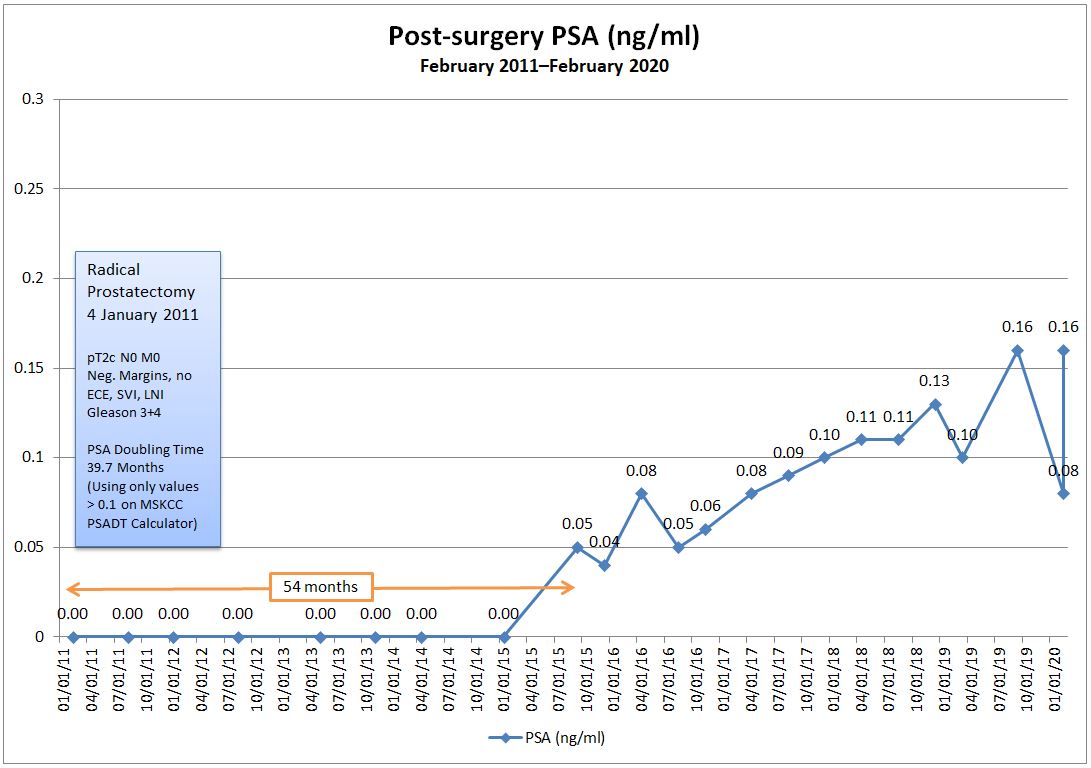